Childrens' free hobbies in the past and today: collecting things

What strikes me as I read this page written by mother on her childhood in the early 1900s, is how much has changed. There are no cigarette cards for children to collect, postage stamps have almost entirely been overtaken by franking or instant messaging, attending Sunday School is no longer widespread and who would want to play marbles scrabbling around the floor when computer games are on hand.

If you know any examples of what children of today might collect, please let me know.

Most children made collections of things that they would keep in a box or a book of some sort. Where I lived on the Huxley Estate in Edmonton, none of these collections ever cost us children anything because we didn't have any money to speak of. We collected things that were free, that were cast-offs or could be picked up around the countryside, like conkers and coloured stones. I once won a prize at school for a wild flower collection.

A firm favourite for collecting was cigarette cards. Cigarette manufacturers, notably Players and Wills put a card in each packet of their cigarettes showing a picture on one side and descriptive information on the other side.

There are examples of later cigarette cards on the page about preparations for the Second World War.


Instead of collecting cigarette cards

Supermarkets and stationers give out cards which can be stuck in books. I think that a particular favourite is on football.

Smoking was common among the men, so it wasn't difficult for children to find someone to save cigarette cards for them. Often, though, the same cigarette card would keep appearing whereas some hardly ever seemed to. This led to swapping of cards which was another spirited and enjoyable activity for children.

Special albums for the collection could be bought from tobacconists for a penny. Filled ones have become collectors' items.

Cigarette cards were produced in themes such as trains, flowers, sportsmen, etc. Children would aim to collect a complete set on a particular theme so that they could complete an album.

Sample of a cigarette card album front cover from the 1930s put up by Players Cigarettes and costing one penny. Tap/click for a larger, legible image.

On the back of the cigarette cards was information about the topic illustrated on the front. This was usually very informative and it was repeated in the album close to the space for the card.

Other favourite for collecting was postage stamps. It was common practice to waylay anyone who received a letter or parcel, particularly if it was from overseas, to request the postage stamp.

Page from a stamp album

The stamp was carefully torn round with its backing paper still attached and then soaked in water to dissolve the glue. The paper backing then just floated off the stamp. The stamp was allowed to dry and then stuck into a special book or album with a a small, transparent piece of paper coated with a mild gum. This was called a stamp hinge.

Children were often very proud of their stamp albums and would spend hours looking at them with other children and swapping duplicates. Whenever family or friends received a letter from overseas, they were always instructed to keep the stamp for someone or other.

Marble collections were also common because boys played them outside with other boys as street games.

Collecting autographs was a hobby that I remember from the late 1940s to the early 1950s. Shops sold small, nicely bound booklets of blank sheets of paper, like the one on the photo and we would get our friends to write a few words and sign them. 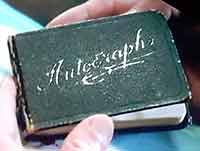 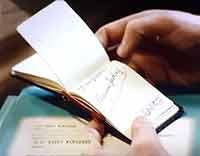